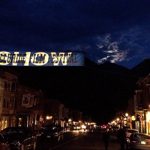 At the press conference kicking off this year’s Telluride Film Festival one of our fellow reporters kindly suggested some sort of ban on people talking on or texting with cell phones while in line for movies. The reason being that the lines are a great place to socialize and hear about movies. When the other half of the room, who were busy texting at the time, had this proposal re-told to them the uproar was overwhelming, definitive and final. No ban.

Actually the lines seemed fine, there is still plenty of socializing to be had. Besides the lines there is also the gondola which is the only way to get to the Chuck Jones Theater. This year I heard of a bus losing its brakes on the way down from the airport after a private party. Had there been an actual crash you would have heard about it too as Laura Linney was on the bus.

As usual passes were sold out a short time before the festival started. There did not seem to be any major upsets with large numbers of people getting shut out of a particular movie. Perhaps this was because George Clooney was not at the festival. Bill Murray was however, in support of his new film with Laura Linney, Hyde Park on Hudson. I did not see the film but I did inadvertently attempt to create shorter lines at the movies I was seeing by simply suggesting that Bill Murray might be at another theater. Me (to a friend): “We should start a rumor that Bill Murray is at the Galaxy”. Person three rows back: “What’s that rumor about Bill Murray!?”.. you get the picture.