Room to Roam: A 118-Acre Wyoming Estate Heads to the Auction Block After Price Cuts

By adminstew September 3, 2013 No Comments 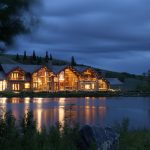 An 118-acre estate in Jackson Hole, Wyo., is going to auction, according to Laura Brady, president of New York-based Concierge Auctions, which is conducting the auction. There is no minimum bid or reserve.

The home, which is owned by entrepreneur Jeff Hussey, was previously listed last September for $37 million. That was the first time the home was on the market. It was reduced to $32.95 million at the end of February.

On top of Riva Ridge, 800 feet above the valley floor and behind a log entry, the compound includes a 13,721-square-foot main house with five bedrooms and nine bathrooms as well as a 3,850-square-foot, four-bedroom guesthouse. A tunnel that doubles as a wine cellar connects the main home to the 1,400-square-foot annex, which includes a one-bedroom, one-bathroom apartment, a greenhouse and a three-car garage. There is a private lake on the property, as well as aspen groves, ponds, creeks and waterfalls. The compound is about 15 minutes from the Jackson Hole Airport, the town of Jackson and the Jackson Hole Mountain Resort.

Mr. Hussey, who bought the property nearly 10 years ago, said in a statement that he was selling because his child had grown and it was time to move on. New York-based Concierge Auctions will sell the home in a live auction on Sept. 12 to the highest bidder, in cooperation with Julie Faupel and Graham Faupel & Associates of Jackson Hole Real Estate Associates, a Christie’s affiliate.