People want Vail’s stories, and that’s what they’ll get Thursday.  History is stories and the thing about a place like Vail is that those stories are told by people who lived them.  And that’s why, during Vail’s 50th anniversary, we begin to understand that there’s no place quite like it.

The Vail Symposium is hosting a Founders of Vail panel. Rod Slifer, Elaine Kelton, Merv Lapin and Terry Minger will tell most of the stories fit to tell.  For example, in May 1962, before there was a Vail, Rod Slifer moved here from Aspen to help Morrie Shepard start the ski school. Slifer was to be paid the princely sum of $500 a month for his efforts, which did not begin or end with the ski school.  There were no job descriptions. Everyone did everything.

Slifer, you’ll be interested to know, was not only Vail’s first Realtor and mayor for 16 years, he took Vail’s first pay cut. In May 1962 before he even arrived, on that original, short Vail Associates corporate roster, someone erased Slifer’s $600 monthly salary and penciled in $500.“It was still the most money I’d ever made,” Slifer said. 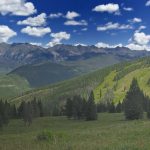 Is the Vail resort complex oversupplied with golf courses? You could make that argument, as several of the valley’s 17 public and private clubs have struggled enormously in the wake of the Great Recession.

But don’t paint with too broad a brush, warn several resort leaders in the Vail Valley.

“They’re not all the same,” said Johannes Faessler, owner of the Sonnenalp Resort of Vail and a companion golf club downvalley at Edwards. “There are different reasons why things happen to different clubs,” he told the Vail Daily’s Lauren Glendenning.

Even in the 1980s, a columnist for a now-defunct newspaper in Vail joked that someday it would be possible to golf continuously from Vail to Glenwood Canyon, a distance of nearly 80 kilometres.

During the 1990s and early 2000s, developers seemed determined to make that come true. There was even a proposal to build a golf course atop an abandoned landfill. At another location, a developer proposed to cap an old pile of mine tailings and create a golf course, as was done at Anaconda, Mont.

Then golfing, as had happened with tennis in the 1970s and skiing in the 1980s, started losing its luster. The growth flattened, nationally as well as at mountain resorts.

Those golf courses that suffered most substantially in the Vail area were those farthest from the ski slopes and resort centers of Vail and Beaver Creek. Brightwater, a project located south of Gypsum, about 72 kilometres from Vail, is now in bankruptcy. A beautiful course called Adam’s Rib, south of Eagle, reportedly sold very few memberships and has revised its fees.

Then came news that only one of four courses at Cordillera, a resort about 16 kilometres from Beaver Creek, would remain open. There are countersuits between the owner of the golf courses, David Wilhelm, and club members, who own property adjacent to the courses.

“Don’t let the Cordillera fiasco overshadow the fact that each one of these courses is doing better,” said Harry Frampton, managing partner of East West Partners. The Avon-based company most typically has built golf course-based higher-end real estate.

Frampton, an avid golfer, says there’s no better place to play golf in the United States than the Vail area. But there are two problems. First, the season lasts only three or four months. And second, he thinks too many of the golf courses are too hard for the average golfer, taking four to five hours to play, too much commitment when there are dozens of other things to do.

He also told the Vail Daily that in a survey of his company’s high-end real estate buyers, 20 per cent had been driven by golf. It’s still important, he said, but golf does not drive the economy of the Vail Valley.

What does during summer? Unlike winter, there is no dominant driver. The Vail Daily sites research done for the Vail municipal government that showed hiking was the top activity of summer visitors.

The US resort is celebrating its 50th birthday this year and has drawn up a list of 50 must-see events, activities, sights and more during the resorts 50th anniversary season. So, which one would you like to do most?

It was in 1962 than the early pioneers started skiing in Vail. It is now one of the largest ski resorts in the USA with more than 5,000 acres of skiable terrain.

There are seven back bowls that cover seven miles. It claims to have more groomed terrain than anywhere else in North America.

As its 50th birthday celebrations get underway there is a brand new state of the art gondola and a whole host of activities to get people in the mood.

And 50 experiences to enjoy…