‘You Can’t Buy That Kind of Publicity’

Reopening Vail Mountain for an extra weekend is pretty cool. Reopening it six weeks after closing day is really cool.

Vail Associates, the precursor to Vail Resorts, reopened Vail Mountain in early June of 1983 or ‘84. Harry Frampton had just finished his first ski season as president of the company, and recalled that the late spring weather turned snowy, just like it has the past couple of weeks.  “We had something like four or five feet of snow,” Frampton said. So, with a few people on hand, the company reopened the mountain. Frampton recalled that much of the mountain crew was off in warmer climates, particularly Lake Powell. Larry Lichliter, then the company’s chief operating officer, started making some calls, and, in those days before cell phones, actually got through to several key employees.  “Enough came back that we were able to do it,” Frampton said.

Soon enough, there were photos in the national press of skiing in June at Vail.“We got incredible press from it,” Frampton said.  Longtime resident Craig Denton wasn’t in town when the mountain reopened that year — in fact, he and his family were in Hawaii. But they heard about skiing in June in Vail, from both friends and in the national press.  “Everybody we heard from was excited — and you can’t buy that kind of publicity,” Denton said.

While Vail doesn’t reopen very often, bonus skiing returned just a couple of years later, after George Gillett had bought Vail Associates.  “We really enjoyed it — we had a lot of fun,” Gillett said, adding that the bottom line didn’t have much to do with the move at the time — and probably doesn’t now. “It’s not done with a profit motive in mind,” Gillett said. “In fact, it’s expensive as all get-out.”

Vail Resorts announced the launch of a new season pass this winter, providing skiers and snowboarders to Summit County’s two east-side resorts, Keystone Resort and Arapahoe Basin Ski Area.  The new “Keystone A-Basin” pass, introduced at $279 for adults with escalating pricing as the year goes on, is restricted during the peak Thanksgiving, Christmas, Martin Luther King and Presidents Day holiday timeframes.  “It’s an incredible value especially for families and folks on the Front Range,” Vail Resorts spokeswoman Kathleen Lessman said. The new pass follows the introduction of a new program at Keystone allowing children under the age of 12 to ski for free at the resort when families book two or more nights with resort-owned lodging. Both Keystone and A-Basin are situated along Highway 6 on the eastern side of Summit County.

The Keystone A-Basin pass is the second Summit-centered offering in the Vail Resorts arsenal, alongside the Summit Value pass, which provides restricted access to Breckenridge Ski Resort as well as A-Basin and Keystone.  The Broomfield-based company also recently announced the addition of Eldora Mountain Resort, near Boulder, to its premium Epic Pass in the coming winter season.  The pass now includes unlimited access to nine resorts in Colorado, Nevada and California. 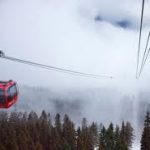 Aspen, Crested Butte and Vail compete for skier days every winter. But this March, the towns and the counties they’re located in will go head-to-head for energy assessments in the Energy Smart Challenge.  In 2010, Eagle, Pitkin and Gunnison Counties all received Department of Energy grant funding to offer the Energy Smart Program. Now, in the third year of the program, it’s time for a little friendly competition.

The Energy Smart Challenge kicked off on Friday and will end on Earth Day, April 20. Every homeowner who signs up for an energy assessment during the Energy Smart Challenge will be entered into a raffle for a free pair of custom, locally-made skis. One lucky participant from the Aspen/Snowmass area, including Basalt, Redstone, Marble and unincorporated Pitkin and Eagle Counties within the Roaring Fork Valley, will win a pair of custom-made Double Barrel Meier skis from beetle-kill pine.

Besides good karma and bragging rights, the winning county will also receive recognition on the Energy Smart and Protect Our Winters websites and an Energy Smart Pizza Party for the community.

People want Vail’s stories, and that’s what they’ll get Thursday.  History is stories and the thing about a place like Vail is that those stories are told by people who lived them.  And that’s why, during Vail’s 50th anniversary, we begin to understand that there’s no place quite like it.

The Vail Symposium is hosting a Founders of Vail panel. Rod Slifer, Elaine Kelton, Merv Lapin and Terry Minger will tell most of the stories fit to tell.  For example, in May 1962, before there was a Vail, Rod Slifer moved here from Aspen to help Morrie Shepard start the ski school. Slifer was to be paid the princely sum of $500 a month for his efforts, which did not begin or end with the ski school.  There were no job descriptions. Everyone did everything.

Slifer, you’ll be interested to know, was not only Vail’s first Realtor and mayor for 16 years, he took Vail’s first pay cut. In May 1962 before he even arrived, on that original, short Vail Associates corporate roster, someone erased Slifer’s $600 monthly salary and penciled in $500.“It was still the most money I’d ever made,” Slifer said. 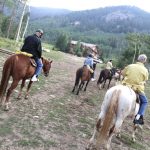 In the hot heat of summer guests to Beano’s Cabin arrive at the Beaver Creek stables, hop on a horse and enjoy a one hour trot to dinner. The trip offers breathtaking views of the mountains, aspen forest, wild raspberries bushes, friendly deer and the rush of a raging river. Never have I journeyed this way to a feast, Colorado cowboy style. It makes you feel as though you’ve earned the 5-course meal waiting for you upon arrival.

After walking through the entrance of Beano’s luxurious alpine lodge my jaw dropped. I was greeted by a smiling host who stood in front of a cozy lounge featuring rock adorned fireplace. The decor here is classic Rocky Mountain lore featuring bear skin hide, antique ski and snow shoes, deer bust, framed cowboy loving landscapes and elk antler chandeliers. The property is located a significant hike from the resort at the top of a mountain thus offering stunning views via the dining rooms floor to ceiling windows. Throughout the meal a local musician strummed his guitar crooning moody Gorden Lightfoot vocals which sent chills down my spine. 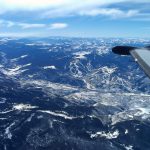 The new service will be the second non-stop western ski gateway from Toronto, behind Denver, making it easier than ever before for those traveling from Toronto and Eastern Canada to ski and snowboard Vail and Beaver Creek, two premier mountain resort destinations in the United States. The new flight also allows for skiing and riding on the same day of travel, as well as the convenience of clearing customs and immigration prior to departure in Toronto. Eagle Airport is conveniently located 45km from Beaver Creek and 56km from Vail, with seamless, door-to-door transfers to accommodations in Vail or Beaver Creek with Colorado Mountain Express, offering shared shuttle and private chauffeured SUV options.

10 Reasons to Visit Vail with Kids….in the Summertime! 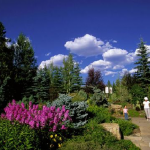 When most people think of Vail, they think of fantastic winter sports – skiing, snowshoeing, snow boarding. Not many people think of it as a summer destination. There’s a saying in Vail that “people come for the winter but stay for the summer,” and there are actually a lot of tangible reasons for it.

Surprisingly (to some of us who weren’t already in the know), Vail has a lot to offer families in the summertime. For those who already knew this, they may not even want others to get in on the scoop. Vail isn’t an over-crowded place to visit, mainly because it’s very large and spread out. The climate is always mild. Vail natives say that they have “great sleeping weather,” meaning you can always open your window for a cool breeze. It makes for great weather for biking, hiking, exploring and playing outdoors. A trip to Vail is quite affordable, too. There is a variety of accommodation options to match every budget and a lot of free activities.

So here we have our top 10 reasons to visit Vail with the kids in the summertime. Start your end of summer or next summer planning now!

Click here to read the top 10 reasons why you should Visit Vail in the Summer!