Telluride Ski Resort just announced that it will celebrate its 40th year in operation this spring with forty days of events, contests, scavenger hunts and more. “Forty days of fun events to conclude our 40th season with a bang. With everything from dress up themed days to the famed pond skim, Telluride is where it will be this spring,” said Telluride Ski Resort’s Marketing Manager, Brandy Johnson.

The 2012/2013 season marks the resort’s 40th year in operation in the beautiful San Juan Mountains. Born out of an adventurous desire to immerse in the precious “white gold” or snowy powder that blankets the surrounding peaks, West Coast entrepreneur Joe Zoline opened the Telluride Ski Resort to the public in 1972. The resort has grown immensely in the past forty years and was ranked #1 in Condé Nast Traveler’s 2012 Readers’ Poll for Best Ski Resort in North America.

After a major storm system left Telluride Ski Resort with close to forty inches this past week, the ski resort’s new marketing efforts come at the perfect time for friends and families looking to enjoy great conditions and participate in unique events this spring. 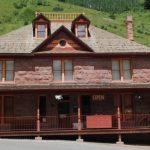 spot. This small town in the San Juan Mountains started out as a mining camp. Whether it’s local geology or the Native American Ute, the preserved town core built during the gold rush or the surrounding ghost towns, these stories have been chronicled by the Telluride Historical Museum.

The Colorado gold rush began in 1858, about ten years after the California gold rush started. Immigrants set out for the Rocky Mountains in hopes of striking it rich. “Pike’s Peak or Bust” described the determination of prospectors. Mining camps and towns sprang up as the miners sought their fortunes. Whether they came from Scandinavia, Italy

, France, Germany, Ireland, Cornwall, or China, they were there for one purpose—gold.

Not all prospectors were headed for Pike’s Peak. Many of them went to the San Juan Mountains in the southwestern part of Colorado. The first claim near Telluride was made in 1875 and registered as the Sheridan Mine. It proved to be rich not only in gold, but zinc, lead, copper, iron, and silver. The town was established in 1878, first under the name of Columbia, but changed to Telluride after the U.S. Post Office informed them Columbia was the name of another mining camp.