Park City was one of the first ski resort towns in the United States and was founded by Mormon pioneers. It has an interesting history, which we covered a few months ago on the Park City Peaks blog and tourists who come to our tranquil town enjoy finding out how it was established.   If you’re curious about Park City, there are several excellent museums in the area which have plenty of excellent information, local artifacts and more.

Museums to Visit in Park City

Park City Museum: With a five star rating on Trip Advisor, this museum shouldn’t be missed and is essential for any Park City vacation. It details the history of the area and its evolution from a silver mining settlement to a world class ski town. There are informative exhibits, events, tours and more. Click here to take a five minute video tour of the museum.

Click here to see all museums worth visiting in Park City.

A Brief History of Park City

Thousands of people visit Park City every year for its excellent skiing, beautiful scenery and vibrant local culture. But many visitors do not know that it also has an amazing history which began after the area was settled by Mormon pioneers. Park City was home to one of the biggest silver mining camps in the country and has an interesting heritage just waiting to be discovered. The area has since become a premier skiing destination and has been home to many world class athletes as well as hosting the famous annual Sundance Film Festival.

Early Mormon pioneers traveled through Park Cityto establish Salt Lake City before they returned and built a toll road. The basin at the top of the canyon was good for grazing and some families settled in the area. It was known as “Parley’s Park City” at the time. Silver, gold and lead was discovered in the area and it flourished until almost becoming a ghost town when the price of silver dropped and The Great Depression arrived.

END_OF_DOCUMENT_TOKEN_TO_BE_REPLACED

“Kathy Burke, who is the apparel buyer for Cole Sport, went to Munich, Germany, and saw a huge exhibit of all these winter clothes Bogner, one of the pioneering companies in ski wear, had designed over the past eight decades,” Morrison [Museum Director] said. “She said that she would see if she arrange to get some of the clothing for a display.”

The result is the “80 Years of Sport in Style” exhibit that will be at the Park City Museum until Monday, Jan. 14.

“Bogner has designed the German Olympic Ski Team outfits since 1936 and we were able to get some of the designs from the 2002, which, of course, was the year the Olympics came to Park City,” Morrison said. “It was perfect timing for us and it’s fun to have a display about skiing and ski clothing while visitors are here for winter activities.”

“I think what draws people to this display is their own experience in ski fashion,” she said. “A lot of people who visit our museum have been skiing for most of their lives and they like the fact that we have a one-piece, pink ski suit and leather boots in the window. It has evoked a lot of memories for people like them.

“For the newer skiers, the exhibit is a reminder to them about how long the sport has been around,” she said. 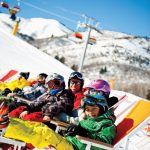 Call me a ski nut. I try to get in as many downhill days as possible and to rip as many runs as I can before lunch. I’m first in line on a powder day, and I like to hit the terrain parks to catch a little air. Life doesn’t get much better than a day on the slopes. Except when the temperature is below zero, and you freeze your tail off sitting on the chairlift, and have to go into the lodge to warm up. Boring! Which is why I was intrigued to hear that Canyons Resort in Park City, Utah, installed North America’s first chairlift with heated seats and a bubble to block the wind. As far as I’m concerned, this invention is long overdue.

The odd thing, however, was that I hadn’t heard of Canyons, even though I have skied most of the best resorts in California, Colorado, and Utah. I was a little skeptical that this could be the resort of my dreams. I had to check it out.

Now, truth be told, if you are a hard-core skier who rocks KT-22 at Squaw, you’ll probably be happier on Utah’s world-renowned steeps at Alta and Snowbird. But if you like fresh-cut corduroy and a mix of terrain, including tree skiing, terrain parks, and some expert double blacks, Canyons will not disappoint.

The main thing to know is that Canyons is huge: 4,000 acres of skiable terrain. That’s nearly twice the size of Kirkwood. The other thing is that it is delightfully deluxe. Originally called Park City West, the resort opened in 1968, and has changed hands several times, each time with major new improvements. Talisker, a residential development company, bought Canyons in 2008 and has pumped more than $50 million into the resort to make it a destination. It seems to have had an effect: Canyons just cracked the top-10 list in Ski magazine’s readers’ poll for the first time.

I can see why. The heated Orange Bubble Express represents the type of experience you’ll have here. I stuck my skis on a rolling rack, rather than carry them through the village. (Love that!) And there were none of those long lift lines I’m used to at Northstar. The food is not Tahoe grub; it rivals Berkeley’s Gourmet Ghetto. While I’d always rather be skiing, even I could hang for a bit at the resort’s Lookout Cabin and enjoy a smoked Utah trout salad with grapefruit and arugula, along with the killer views of the Wasatch Mountains. All the meals at Canyons were consistently creative, delicious, and healthy. And who would expect fine, fresh cuisine on the top of a mountain in Utah in the middle of winter?

Really, I wish I’d had a few more days at Canyons, and not just so I could get to all that great terrain, or so I could soak up more of that sublime service: This winter paradise thinks it’s a Carnival Cruise on snow. You can soar above the trees on a zip line between two canyons. Or if you are afraid of heights, like me, opt for snowshoes, and hike the deserted and peaceful canyon between ski ridges.

Click here to read the fabulous article on park city.