The next time doctors or patients in St. John’s Medical Center’s cafeteria pass up water for a sugary soft drink, they may think twice.  At least, that’s what hospital dieticians hope.

The soft drink reduction campaign is part of an initiative aimed at making the hospital’s food options healthier. One of those was to subsidize the cost of healthier foods by increasing the price of unhealthy items.  The salad bar, for example, costs 10 percent less than it did in December, Hubbard said. In turn, a large soft drink has shrunk from 22 ounces to 16 ounces, but the price is the same.

Another part of the program is a new focus on local and organic food products.  Beginning this spring an organic farm in Teton Valley, Idaho will deliver fresh vegetables to St. John’s each week. Chefs at the cafeteria have also switched to using cage-free eggs and natural meat that doesn’t contain antibiotics or hormones.

Hospital food is often compared to airplane food, Maddex said, but it shouldn’t be that way. The hospital should be a model for the community.  “Everybody should be eating healthy,” she said. “But I do think that people sometimes look to hospital staff as examples. We should be walking the walk.”

Jackson Hole Has it All—Including an Incredible Food Scene

You’ve already heard how much we love Jackson Hole. The charming little town really does have it all…including a seriously hip up and coming foodie scene. What was a pretty scarce cowboy-cuisine-only town just a decade or two ago is now a thriving food scene with the sort of risk taking chefs you just don’t expect to find in the middle of the Grand Tetons.

For starters, the Pig Candy at Café Genevieve makes the entire trip to Wyoming worthwhile with one bite. An outrageously salty, sweet, sticky smoky crackly piece of caramelized bacon, Pig Candy is a Jackson Hole treat that’s becoming pretty famous—you can even have it flown it overnight for your next board meeting. Now that’s employee appreciation.

Once you’ve had your fill of pig candy, it’s time for a steak dinner. You are in the mountains, after all. In the heart of the town square right next to the legendary Million Dollar Cowboy Bar is a quintessential farm-to-table restaurant serving some of the best cuts in the country. The Local is a place for…well, the locals. They feature classic and specialty cuts that come from cattle less than 10 miles away along with seasonally-inspired food. Owned and operated by chefs Will Bradof and Paul, Local showcases their enthusiasm for reviving the craft of in-house butchery with a focus on dry-aged steaks and house-made sausages. It’s a perfect place to relax and grab an amazing burger for lunch or to indulge in a hearty foie gras and filet mignon sort of date night. 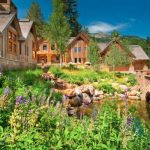 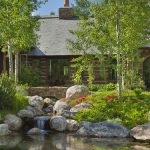 New York-based Concierge Auctions is pleased to announce the July 12th auction Without Reserve of The Grand Teton Estate, ranked in the top three most spectacular ski homes in America by CNBC, just minutes from world-renowned skiing and snowboarding in the winter and unparalleled sightseeing, hiking and biking in the summer. Designed by premier Montana Architect Jonathan Foote, this rock and timber masterpiece is located on 10.63 heavily treed and very private acres near the base of the Jackson Hole Mountain Resort. The architecturally-stunning estate offers 23,250+/- square feet of living and would be impossible to reproduce with today’s building regulations. Originally offered for $32.5 million, The Grand Teton Estate will sell to the highest bidder.

“This auction represents a rare opportunity to secure one of the finest homes in Jackson Hole without the limitations of the current building size restrictions. Today, Teton County allows only 8,000 square feet of habitable living space in contrast to the over 23,000 square feet this estate provides,” stated Renner. “There is no other property in Teton County that offers what this property does — rare, expansive square footage on over 10 completely private gated acres, world-class amenities, and a premier location with spectacular views at the base of the Jackson Hole Mountain Resort.”

Ski Resorts Are For Non-skiers, Too

Ski resorts are for non-skiers, too.

If you mention the word ‘vacation’ to most people, the chances are they will immediately think of sun-soaked resorts in various parts of the globe. They will conjure up images of long, unspoilt beaches, crystal clear oceans, luxurious hotels and a variety of exciting restaurants offering the very best examples of local and international cuisine.

However, not every holiday has to be about swimming, sunbathing and snorkelling. Although most people look to spend their annual vacation doing nothing more strenuous than topping up their tans, it should be borne in mind that there are plenty of alternatives which don’t involve burning to a crisp on a lounger.

All over the world, from the iconic beauty of the Swiss Alps to the millionaire’s playground of Aspen in Colorado, there are hundreds of ski resorts which are just waiting to be enjoyed. One of the sad things about them, however, is that they remain undiscovered by people who have no intention of taking up skiing.

Available for a limited time, Jackson Hole Central Reservations, in conjunction with American Airlines, is offering an exclusive discounted rate on your ski vacation from Dallas, TX.

Starting at $499* per person and include:

Call our local travel experts today to learn more or customize this package with lodging upgrades, additional activities and transportation, 888-838-6606.

A century ago, Jackson Hole nightlife revolved around the Clubhouse. Built in 1896 on Center Street, the Clubhouse was the place to gather for dances, a game of cards and gossip. Folks from as far north as Moran and as far south as Hoback used to travel by horse and wagon or sleigh for a night of socializing.

While Jackson Hole’s Clubhouse days were full of wild times and revelry, the citizenry of the entire Jackson Hole valley numbered in the dozens at that time. Today, with a population that can swell to 50,000 during the summer, and with several million visitors passing through each year, Teton County requires a wider array of options.

Whether a hard day on the slopes calls for a mellow night or you are determined to brush up on your western swing amidst a sea of cowboys, Jackson Hole has something to fit the bill: fine dining, eateries with live entertainment, watering holes full of character and characters, and clubs brimming with hot music and boogying dancers.

The king has fallen.

With a backdrop of the Teton Mountain Range, the golf courses in and around Jackson Hole offer not only exceptional golfing opportunities and award winning greenways, but jaw-dropping scenery.

Whether playing golf professionally or just looking to learn how to play golf, Jackson Hole in Wyoming has many golf courses to serve everyone’s needs. Varied courses offer an array of amenities and facilities, but most importantly a wide range of challenges with scenic backdrops that make playing golf both exciting and relaxing.  The only thing rivaling the views at the course is the service, which is impeccable all the way.

The valley’s oldest golf resort, JH Golf & Tennis has hosted numerous U.S. Golf Association National Championships since opening in 1963. Golf Digest also consistently ranks it the number one course in the state. The resort’s head golf pro attributes the accolades to the course’s classic design (it was redesigned in 1973 by Robert Trent Jones, Jr.). Perhaps most classic of all is the 13th hole, a short (169 from the back) par 3 over water with, what else, views of the Tetons in the background.

In October, skiers and riders had high hopes for winter after Aspen and other Colorado ski resorts got hit with a big snowstorm early in the month. The season quickly petered out, though, with lower-than-average snowfall and higher-than-average temperatures.

“You had that early-season wallop and then nothing much after that. This year is going to be different,” said Boston, expert senior meteorologist with AccuWeather, a weather service with headquarters in State College, Pa.

Boston said conditions will be favorable for snowfall in the Colorado mountains starting in late September and continuing through at least November. Ski resorts should be able to build up a decent snowpack early in the ski season, he said.