Explore Colorado: Off the Slopes Fun in Breckenridge

Ski season is winding down with many resorts closing this weekend and next weekend.  Breckenridge Ski Resort closes on April 14th.  While there is a lot of fun on the slopes, there is also a lot of family fun you can have off the slopes.

If you like to hike, snowshoe, or skin up a mountain, then head up Peak 9 or any of the peaks at Breckenridge before the lifts open or after the ski season is over.  If you go early, you will get great views of the sun coming up over the Continental Divide.  It is a workout and it is free!  Something else that is free is sledding at Carter Park, just a couple of blocks off of Main Street.  It is a great hill for a ton of sledding fun.

The Gold Runner Alpine Coaster runs in the winter and summer.  The coaster is 2,500 feet of track that winds through trees and right along the ski slopes.  Through this weekend, it is open 11am-4pm.  It will re-open for the summer season.  Single rides are $7 for ages 3-7 and $16 for 8 and up.  All day tickets are $12 for ages 3-7 and $29 for 8 and up.  During the summer, there are all sorts of activities on Peak 8 that the kids will enjoy. You can head north on Highway 9 to Frisco to visit the Frisco Adventure Park.  The tubing lanes are 1,200 feet long.  Cost is $25 a person.  You can also go on a roll in an Xorb, which is kind of like a giant hamster ball.  Cost is $7 for a 5 minute ride.  The kids will love it and adults will get a great mini-workout running and falling in the Xorb.

What Can I Do If I Don’t Ski (or Snowboard)?

Breckenridge, Colorado is known as a ski and snowboard Mecca (and for good reason). For those not interested in the slopes, this historic town and the surrounding backcountry offer numerous ways to play. You asked. We’re answering.

Whether participating in arts workshops, exploring the community’s rich history or just cruising town, Breckenridge offers many activities beyond the slopes. Photo by Bob Winsett

Unleash creativity – From fine arts and textiles to photography and functional pottery, workshops in the Breckenridge Arts District span a variety of media. Work with artists-in-residence, catch a performance by the award-winning theater company, or make your own earrings. Check out the Breckenridge Arts District Calendar for a schedule of off-the-slopes arts events.

Explore the past – More than 10 local museums and historic sites serve as a window into Breckenridge’s gold mining history. Whether on a walking tour or browsing through local museums, you’ll meet Colorado’s original naturalist, an escaped slave-turned-prominent businessman and the townsfolk that still haunt some of Breckenridge’s oldest saloons. Visit BreckHeritage.com for a list of sites, museums and tours.

“I came for the winter, but stayed for the summer.”

It’s a well-worn cliché employed by one-time ski bums who quickly grasped the appeal of ski-town living after the snow melted, the temperatures rose and the wildflowers bloomed.

In recent years, top ski destinations have beefed up their warm-weather offerings to lure visitors. Most large ski resorts offer world-class golf and mountain biking. Many are adding bells and high-altitude whistles like man-made whitewater parks, ziplines and much more. The bonus? Bargain rates at some of the region’s swankiest spots.

“In the summertime, travelers can experience the same luxurious lodging and dine at the same world-class restaurants for a fraction of the price,” says Dan Sherman of Ski.com, which sells mountain vacation packages. “We have found that travelers can snag deals with savings of up to 85-percent off the most expensive travel times in winter.”

Wow, you say? That’s what we thought, too.

Here are some places to spend a spectacular summer in the mountains.

This is a great article from the Vail Daily about the increasing shift of mountain communities into year round destinations.

There was a time when mountains were enough — when skiing down or hiking up forested slopes, fishing and rafting rivers or biking or riding horses through the hills provided enough entertainment to last a week. As mountain resort communities grow and compete with one another for tourism dollars, the mountains simply aren’t cutting it. Visitors want more.

Growth in visitors and sales tax revenues proves that ski towns are real communities no longer serving the very narrow niche of winter sports. The in-your-face overload of countless activities doesn’t stop with recreation. Summer events and festivals are filling up the calendars, giving guests from far and wide all the more reason to find their Rocky Mountain high. Event planning has taken off in the mountain region, and in many cases the public sector has its hand in it like never before. The mountains have become everything from a foodie’s paradise to a place to unwind to a spa or golf destination. Festivals focusing on music, art, food and dance plump up weekends that used to be desolate as recent as a few years ago. 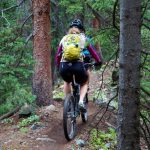 Breck Bike Week, taking place Aug. 15-18, 2013 – may only be four days, but the lineup packs a week’s worth of activities into long weekend in Breckenridge, Colorado. The grassroots cycling event sits sandwiched between the Breck Epic (Aug. 11-16) and stages two and three of the USA Pro Cycling Challenge (Aug. 20-21); tack on a few bike-in movie nights and math wizards will arrive at something like 12 days of cycling in Breckenridge.
Addition aside, Breck Bike Week brings a bigger-than-ever expo, which serves as event headquarters (be sure to stop by the Osprey tent!) and meeting grounds for many Bike Week events.
Other events throughout the week include women’s mountain bike skills clinics, a happy hour ride with Breckenridge Mayor John Warner, Poker Ride (Go Fish ride available for the kiddos), a youth race series and more. Visit BreckBikeWeek.com for a full schedule!
Click here to read the article.

5 Things to do in Breckenridge During the Summer

The snow has melted in Breckenridge and the skis are packed for the summer. It’s time to get out the mountain bike, and hiking shoes and explore this scenic mining town during the summer months. July is the perfect time to take in the area’s history, enjoy the abundant outdoor activities, do a little shopping and enjoy a local brew. Bring a sweater, the nights can be wonderfully cool. Here are five things to do in Breckenridge, CO this summer.

1.  Participate in a Festival – For the patriotic, there is the July 4th celebration with a zany float filled parade and splashing in the fire hose on Main Street. Athletic types will enjoy Breck Bike Week. Our family enjoyed the annual Poker Ride. My older kids were skeptical they could complete the 10 mile mountain bike trail, but were quite proud of themselves when they did. My 8 year old and I stuck to the Go Fish ride. Perhaps I should have been embarrassed when the 3 year old on the strider bike zoomed past me. For adults, Breckenridge Beer Festival offers tastes of local micro-brews all in one place. Our favorite – HOSS Rye Lager from the Great Divide Brewing Company.

2.  Touch the Sky – Some of the most beautiful vistas in the world are right outside your door in Breckenridge. Take a guided hike through the Breckenridge Heritage Alliance or the Breckenridge Recreation Center. We visited Preston Mill ghost town, and learned how to shake hands with a tree on a flora and fauna hike. It’s also easy to find hikes on your own. We had a trail right outside our door, that started at a closed mine shaft. My son’s favorite hike was the McCollough Gulch Trail where we saw picas, waterfalls and touched the sky. My youngest liked the shorter and history filled Iowa Mine Trail, which is a short bike ride from downtown.

Click here to read the rest of the activities.

Known worldwide as a premier ski town, Breckenridge racks and stacks with the biggest and most famous ski resort destinations in the world, and rightfully so. Breck sports over 2,300 acres of skiable terrain on nearly 3,400 vertical feet from top to bottom, including long groomers, hairy steeps, glades, cornices, above tree line peaks, and epic terrain parks, all anchored by a beautiful Victorian town hosting a full compliment of dining, nightlife and shopping options.

What’s slightly less known outside of Colorado, is that Breckenridge also hosts an equally big, diverse, and excellent network of singletrack for everything from the timid novice to the super-adventurous expert. One of the things that makes Breck so wonderful as a mountain bike destination is that many of the great routes are accessible directly from town with no driving or shuttling required.