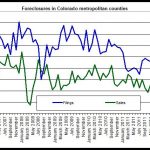 Foreclosures in Summit County fell to the lowest levels since 2008 last year, dropping to 264 in 2012 from 316 in 2011, according to data from the Summit County Treasurer’s Office. Accounting for the number of foreclosures that involved time-share properties, which fluctuates, local filings for single-family homes appear to be on track to return to pre-recession levels.

There were 33 foreclosures in 2008. That number spiked to 47 in 2009 and got as high as 145 in 2011 before beginning to decline last year.  “It could be people’s financial situations improving,” Summit County Treasurer Bill Wallace said. “Or, the other guess is second-home owners are either unable to keep their homes or haven’t been buying second homes. “ Though foreclosures are holding steady to last year so far in 2013, experts expect to see the number of filings decline again over the next 12 months, saying Summit County’s market seems to be directly linked to, though slightly behind, Denver’s.  “It’s coming back down,” said Maggie Dew, business development officer for Stuart Title in Frisco. “We’re close enough to Denver that when their market is strong, then our market is strong as well. However, we do lag behind their market.”

Foreclosure sales across the state have fallen to a six-year low, down 18 percent in 2012 from the year before, with all but 15 counties across the state posting declines last year.  There are more than 30,000 properties on the tax roll in Summit County, and only a small fraction of them have been foreclosed, even through the rough economy of the last few years.

Market Insights: THE Simplest Way to Get an Unbelievable Deal

Buy and hold. Three words — that’s it.
The national housing outlook is positive.  The consensus of a panel of economists is that due to low inventory, low housing construction in recent years and pent-up buyer demand, that over the next 10 years we can expect prices to go up around 40 percent or +/-3 percent a year, which is in line with past average appreciation.
Prices in Summit County have plummeted since the peak. The economists mentioned above stated that nationally prices have fallen 33 percent. Here is what is happening in Summit County. Minimum drop in prices- 20 percent.  Typical drop in prices – 25 percent. Very common drop in prices – 30 percent.  The largest drop in prices – 40 percent.

In other words, everything is on sale right now. No matter what you buy, you are getting a deal.  Summit County price appreciation lags the rest of the nation.

There have been three market slumps. The first started in1973 and lasted four years. The next one started in 1981 and dragged on for seven years. And, of course, the current one that started here in 2008 (two years after the rest of the nation).  Based on my experience, our market lags the rest of the country going into and coming out of real estate slumps.

Yesterday Vail Resorts, Inc. finalized the sale of approximately 2.1 acres of land at the base of Breckenridge Ski Resort’s Peak 8 to an affiliate of Breckenridge Grand Vacations Inc. The sale price was $11.1 million in cash.

Breckenridge Grand Vacations is the developer of several premier timeshare properties in Breckenridge, including the popular Grand Timber Lodge and Grand Lodge at Peak 7. The Peak 8 property will be developed as a 75-unit, ski-in/ski-out timeshare resort with a host of amenities including a public restaurant and full-service spa. The project will also improve skier circulation at the base of Peak 8 by widening certain key ski trails.

The timeshare development is the latest addition to the overall master plan and vision for developing vibrant base areas on Peaks 7 and 8 and creating a strong connection to Breckenridge’s historic Main Street. To date, The Breck Connect Gondola, One Ski Hill Place, Crystal Peak Lodge and The Grand Lodge at Peak 7 have been developed under the Peak 7 and 8 Master Plan.

Breckenridge Ski Resort also recently announced its plans to greatly enhance on-mountain summer activities, subject to applicable regulatory approvals, and is in the final stages of the Peak 6 expansion accessing 543 acres of new terrain which is scheduled to open next ski season.

“This is an exciting time for Breckenridge Ski Resort, with continued investment both on the mountain and at our base areas,” said Alex Iskenderian , senior vice president and chief operating officer for Vail Resorts Development Company. “Improving the bed base at Peaks 7 and 8, and having a gondola taking our guests to and from town, has transformed the Breckenridge experience.”

In addition to enhancing the look and experience at Peak 8, the timeshare project is expected to generate $2.5 to $3.0 million to the Town of Breckenridge through real estate transfer tax revenues, said BGV’s Rob Millisor . “I would like to thank Vail Resorts for the opportunity to bring such a visionary project to life, as well as the Town of Breckenridge for its partnership and thorough development review process,” Millisor said.

The Peak 8 timeshare development will be at the site of the Bergenhof Day Lodge, which will be torn down this spring. Vail Resorts has committed to partnering with the Summit County Recycling Center to recycle materials that are eligible for recycling and Breckenridge Grand Vacations plans to incorporate reclaimed materials into its new building. Some grading and utility work in the area will begin this summer and vertical construction of the timeshare project will begin in the spring of 2014.

“Breckenridge Grand Vacations has been a great partner at the Grand Lodge at Peak 7, and we look forward to continuing that partnership at Peak 8,” said Iskenderian.

In 2010, Breckenridge Town Councilman Mike Dudick led a charge for a lodging tax increase to generate marketing money for the town of Breckenridge.  Some residents worried the funding wasn’t needed or the added cost might deter potential visitors, but in the throes of the recession, voters approved the tax hike.  Two years later, Breckenridge’s marketing pocketbook is approximately $1.2 million fatter, but is the town better off economically?While it is difficult to determine the return on investment of money spent to promote an entire town, rather than a single business, those who monitor the pulse of the local market say yes.

“I think the clearest indicator of the success of the increased marketing dollars is that lodging revenue in the town of Breckenridge has grown,” Dudick said. “All indicators are that we’re doing better than what we have in the past.”

As of October, short-term lodging sales tax revenue was up 6.2 percent year-to-date over 2011. Bookings for rooms in Breckenridge were tracking up 2 percent from last year for the month of December, even though occupancy at 16 other mountain resort destinations was down more than 12 percent for the same month, according to data released by the Mountain Travel Research Program at the end of November.  Sales tax numbers for the retail and restaurant industries also trended well this year.

While the numbers aren’t always great, things might be looking up in some areas for commercial real estate in Summit County, according to local professionals.

Jack Wolfe of Wolfe & Company Commercial Real Estate in Breckenridge sees a few good signs that things are turning around, despite some increased vacancy rates in Breckenridge for July. Three large development parcels sold or went under contract last quarter in the resort town, which indicates to him the bottom of the current real estate recession has been reached.

“Restaurants are just off the chart right now,” Wolfe said. “I’ve got several restaurants who are looking for space in Breckenridge, and I can’t find them.” Click here to read the entire article.