Do More in Breckenridge 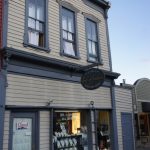 Filling a day of activities has never really been a problem for those in Breckenridge, whether they are visitors or residents. The options are wide in range and scope. Keep in mind, Breckenridge has a fascinating past, a unique and wonderful story that makes our community what it is today. There is no other place in the world like Breckenridge, Colorado.

Learning some of that past, a bit of that historic story, can add a great deal of value to your Breckenridge experience. Museums and historic sites can consume your entire day, or a lazy hour. Offerings range from mining history, Victorian life, snowshoe treks, railroad history and our path to the ski industry. Try the Welcome Center Museum first. With displays that run the gamut of our historical timeline, a children’s loft, and a more interactive feel, you can gain an in-depth overview and still entertain them all.

The history literally surrounds you. Stopped in Starbucks while in town? The Main Street location used to be the home of Frank and Theta Brown, long time residents. Frank served as the Mayor of Breckenridge and as the Summit County Treasurer for many years during the 60s. Nearly all of the restaurants and shops you enjoy in this community have a story. As you explore Breckenridge, consider what may have come before; consider who may have come before.

Looking Back at Breckenridge History 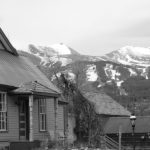 Long before white settlers from the east crossed the Continental Divide, the area that would become Breckenridge was part of the summer hunting grounds of the nomadic White River and Middle Park Ute Native Americans. Although there were a few white trappers, mountain men, and traders roaming the area as early as 1840, the establishment of a town was the result of America’s mid-nineteenth-century rush to settle the West. By 1859 the Pike’s Peak Gold Rush was on, and discovery of gold in the Breckenridge area brought miners and fortune seekers to the “Blue River Diggings.”

By 1862, the Civil War and increasing difficulty in locating free, accessible gold began to clear the camp of prospectors. By 1870 the population of Breckenridge had plummeted to 51. Breckenridge was quiet and would remain so until large-scale hydraulic mining created a boom in the early 1870s.

In 1879, rich silver and lead carbonates were discovered, and fortune hunters once again invaded Breckenridge. Miners, merchants, and professionals migrated to the mining camp for a different reason than in 1859. This time it was for silver rather than gold. Breckenridge became an important hard-rock mining location and a prominent supply center. There was plenty of “elbow room” to grow, and the community organized and incorporated a town government in 1880. An ambitious grid was laid out for the 320-acre town site. Breckenridge’s wide, main street easily allowed freight wagons to turn around, and soon it became the center of social and athletic activities. During this mining heyday, the downtown provided miners with a variety of attractions. Without diversions, life in the mining camp would have been an endless cycle of routine work.

A number of Breckenridge’s historic buildings were also lost during the “postwar” period for a variety of reasons. Some property owners demolished their structures to reduce their tax burden. Other buildings were lost to accidental fires, and some were purposely burned in practice exercises for volunteer fire crews. Some buildings were even torn down for firewood. While economic activity and population declined with the cessation of mining, Breckenridge never became a ghost town. Instead, it remained home to a few hardy, resilient residents.  A decade later, on December 16, 1961, Rounds and Porter, a Wichita, Kansas lumber company, opened the Breckenridge Ski Area, and a new boom era began. Transportation improvements fueled a new Breckenridge recreation “rush.”

Market Insights: THE Simplest Way to Get an Unbelievable Deal

Buy and hold. Three words — that’s it.
The national housing outlook is positive.  The consensus of a panel of economists is that due to low inventory, low housing construction in recent years and pent-up buyer demand, that over the next 10 years we can expect prices to go up around 40 percent or +/-3 percent a year, which is in line with past average appreciation.
Prices in Summit County have plummeted since the peak. The economists mentioned above stated that nationally prices have fallen 33 percent. Here is what is happening in Summit County. Minimum drop in prices- 20 percent.  Typical drop in prices – 25 percent. Very common drop in prices – 30 percent.  The largest drop in prices – 40 percent.

In other words, everything is on sale right now. No matter what you buy, you are getting a deal.  Summit County price appreciation lags the rest of the nation.

There have been three market slumps. The first started in1973 and lasted four years. The next one started in 1981 and dragged on for seven years. And, of course, the current one that started here in 2008 (two years after the rest of the nation).  Based on my experience, our market lags the rest of the country going into and coming out of real estate slumps.

What Can I Do If I Don’t Ski (or Snowboard)?

Breckenridge, Colorado is known as a ski and snowboard Mecca (and for good reason). For those not interested in the slopes, this historic town and the surrounding backcountry offer numerous ways to play. You asked. We’re answering.

Whether participating in arts workshops, exploring the community’s rich history or just cruising town, Breckenridge offers many activities beyond the slopes. Photo by Bob Winsett

Unleash creativity – From fine arts and textiles to photography and functional pottery, workshops in the Breckenridge Arts District span a variety of media. Work with artists-in-residence, catch a performance by the award-winning theater company, or make your own earrings. Check out the Breckenridge Arts District Calendar for a schedule of off-the-slopes arts events.

Explore the past – More than 10 local museums and historic sites serve as a window into Breckenridge’s gold mining history. Whether on a walking tour or browsing through local museums, you’ll meet Colorado’s original naturalist, an escaped slave-turned-prominent businessman and the townsfolk that still haunt some of Breckenridge’s oldest saloons. Visit BreckHeritage.com for a list of sites, museums and tours.

Before people came from all over the country for Breckenridge’s views and ski slopes, they came for the gold and silver embedded in its hills. The area is spotted with abandoned and resurrected mines that tell the story of the hard lives of some of Summit County’s earliest residents.

Among these is the Washington Mine, located on Boreas Pass in the southwestern outskirts of Breckenridge. Meticulously preserved and carefully reconstructed by the Breckenridge Heritage Alliance, the mine is nearly a three-dimensional diorama of the town’s mining history. What remains of the mine today was once just the small antechamber of a much bigger operation that extended up from the current site.  But local historians have salvaged and, in some cases, rebuilt a small, cute campus that nevertheless paints a pretty realistic picture.

The 90-minute to two-hour tours of the Washington Mine run twice daily most days of the week.  A great option for families with children — the tour is entertaining, dimensional and, at times, hands on — local historians lead their guests back through the pages of Breckenridge’s history, showing and telling the way people lived in and out of the mines more than 100 years ago.  Click here for more information.